New yard signs are up at 241 Xenia Ave. One reads “Black Businesses Matter,” another reads simply “C.” The signs point to the presence of comedian, local resident and entrepreneur Dave Chappelle, whose company, Iron Table Holdings LLC, got the green light from the Yellow Springs planning commission last week for a major renovation of the mixed-use building.

County records show that Iron Table Holdings purchased the property encompassing three attached buildings at 239, 241 and 243 Xenia Ave. in November of 2018 for $599,000. The property currently houses Glen Garden Gifts to the north and Unfinished Creations to the south, while the middle building was previously home to Blue Hairon, a hair salon, and Wander & Wonder, an outdoor clothing and goods retailer.

According to plans presented at the meeting, the renovation of 241 Xenia Ave. will lead to a new hair and nail salon at street level, as well as a remodeled apartment on the upper floor with an extensive roof deck.

The project was the focus of one of five public hearings at the planning commission’s regular meeting, held virtually last Tuesday, Aug. 11. Another hearing involved a second property owned by Iron Table Holdings, 403 Xenia Ave., while a third hearing concerned a property currently being purchased by the architect who represented Chappelle’s company at the meeting. Two other hearings involved unrelated conditional use applications.

Architect Max Crome spoke via Zoom at three of the public hearings. Crome grew up in Yellow Springs and is currently the principal of Crome Architecture, a San Rafael, Calif.-based firm. As the sole representative of Iron Table Holdings at the hearings, he presented plans for the 241 Xenia Ave. renovation, as well as for an interior remodeling of the historic property at 403 Xenia Ave.

Crome was authorized by letter to speak at the hearings, but not to bind Iron Table Holdings to any contract or agreement.

Separate from representing Chappelle’s company, Crome also presented plans for a renovation of a third property, 604 Xenia Ave., that he is currently in the process of purchasing from its present owners, Krista Magaw and Andrew Carlson. According to Crome at the meeting, he intends to locate an office of his architecture firm there.

While Crome declined to answer a request at the meeting for more information about Iron Table Holdings, a privately held firm, Ohio incorporation documents from September of 2018 list Chappelle as its president. The documents also connect the firm to Pilot Boy Productions, Chappelle’s longtime production company.

Chappelle did not appear at last Tuesday’s meeting, however, nor was his name mentioned in connection with the projects. A company representative did not respond to News queries for more information about Iron Table Holdings.

Iron Table Holdings owns a total of three properties in downtown Yellow Springs, according to county records. In March, the company purchased 309 Xenia Ave., previously home to Oten Gallery and Aleta Café, for $385,000. And in June, it purchased 403 Xenia Ave., a property donated to Antioch College by villagers Esther and David Battle last summer. Antioch stated at the time of the donation its intention to put the property up for sale. After almost a year on the market, the property sold for $390,000.

Recent queries to Chappelle’s public relations manager, Carla Sims, regarding details of the comedian’s larger plan or vision for the accumulated properties were unanswered by press time. 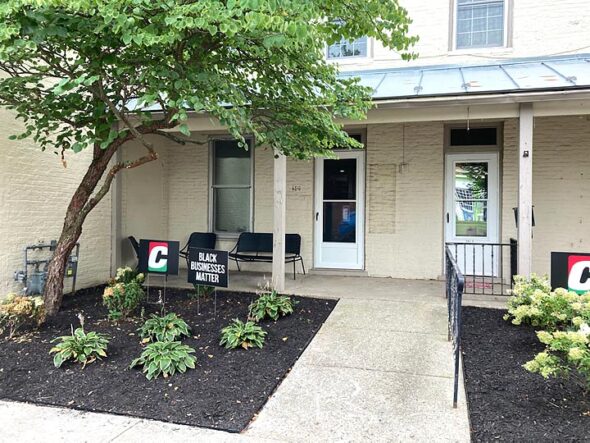 Iron Table Holdings LLC got the green light from the Yellow Springs planning commission to move ahead with a major renovation of 241 Xenia Ave. Incorporation filings show that the company is owned by comedian and local resident Dave Chappelle, as the “C” sign suggests. A second Iron Table Holdings property also came up for rezoning at the Aug. 11 meeting. (Photo by Reilly Dixon)

Regarding the 241 Xenia Ave. renovation, the plans call for the creation of a new nail and hair salon with eight manicure stations, eight pedicure stations and five hair styling stations to occupy about 1,500 square feet at ground level. A 450 square-foot glass “jewel box” structure will be added to the front of the existing brick façade at street level, bringing the currently set-back building flush with the sidewalk. A wooden addition facing Kieth’s Alley in the back will be demolished and an off-street parking area will be added to accommodate six vehicles for the trio of attached buildings (239 through 243).

In addition, an existing one-bedroom apartment on the upper level will be remodeled, and a 2,400 square-foot roof deck will be added to cover the street-facing portion of the 241 Xenia Ave. rooftop and extend in an “L” over Unfinished Creations at 243 Xenia Ave. While the architectural renderings presented last Tuesday show tables and chairs scattered across the roof deck, Crome clarified in response to a question that the deck is not intended as a restaurant.

Crome also addressed a concern from an owner of the neighboring property, 245 Xenia Ave., against which the roof deck will abut. During the public hearing, owner Ellen Hoover stated her worry that a proposed privacy screen at the edge of the roof deck would block her tenant’s view of the sky. Crome promised to work with Hoover on the issue.

Hoover was the only member of the public who spoke at this hearing. She also raised an ongoing concern regarding what she sees as insufficient time for public review and comment prior to planning commission meetings. In the current instance, the project is “a major visual change to the downtown that deserves some additional time for public input,” she wrote in an email to the Village, while also expressing support for the project during the meeting.

The street-level commercial space at 241 Xenia Ave. was previously rented out on a month-by-month basis to two different tenants. One was villager Lori Deal, longtime owner of Blue Hairon, while the other was Waynesville resident Jake Brummett, who opened his shop Wander & Wonder there in 2017. Both tenants were notified by Iron Table Holdings in February that they needed to move out by the end of April to accommodate new plans at the property.

Having worked in that location for over 30 years, Deal was upset by the termination at the time, publicly voicing her concerns in a published letter to the editor in March. She moved out of the building in March, and has not reopened her business elsewhere, largely because of COVID-19 concerns, she said this week. Deal added that she has made peace with the move.

For his part, Brummett said the situation has worked out in his favor. He was allowed to stay rent-free from April to July because of pandemic-related slowdowns in the property’s development. During that time, he sought and found a new space for his shop. Wander & Wonder is now located in Kings Yard, in the space vacated by Sam & Eddie’s Open Books.

The planning commission approved 5–0 the conditional use application for the 241 Xenia Ave. renovation, with the condition that a lighting plan be submitted. On a recommendation from Village staff, the commission waived code-stipulated parking requirements, which would have mandated a total of 55 spaces for the three attached buildings. Municipal lots and some dedicated parking on Kieth’s Alley were deemed sufficient for the property.

Commission members had few questions about the project, and no timeline for construction was offered at the meeting.

A second Iron Table Holdings property, 403 Xenia Ave., was the focus of a separate hearing last Tuesday. The company sought a zoning change to allow for a renovation leading to a multi-family dwelling with three apartments. A wholly residential use is not permitted under the property’s current zoning of B-1, or central business district. The building is currently mixed use, with professional office space on the lower level and two apartments on the upper level.

Following Village staff advice, Iron Table Holdings sought a rezoning of 403 Xenia Ave. and two adjacent properties to R-C, or high-density residential, to match the surrounding area. The rezoning of all three properties, including a…