The newly renovated and just opened apartment block on Eighth Street, between North Main Street and Miriam Hospital, looks like the standard yellow brick parochial school of the 1950s. Once part of St. Raymond’s convent and school complex, this is believed to have served as a refuge for wayward youth. 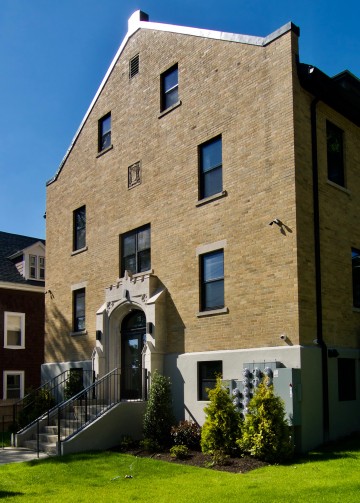 A Tudor Gothic entrance is the only really distinguished detail from its earlier life. But this unassuming structure is a Trojan horse.

18 Eighth Street has two studios, fourteen one-bedroom apartments, and a couple of two-bedroom suites. It is is another demonstration of the astonishing health of real estate on Providence’s East Side.

That prosperity is now reaching down the slope of the Summit neighborhood. Only twenty-two years ago, when looking for a house to buy, our realtor advised us against investing west of Hope Street. 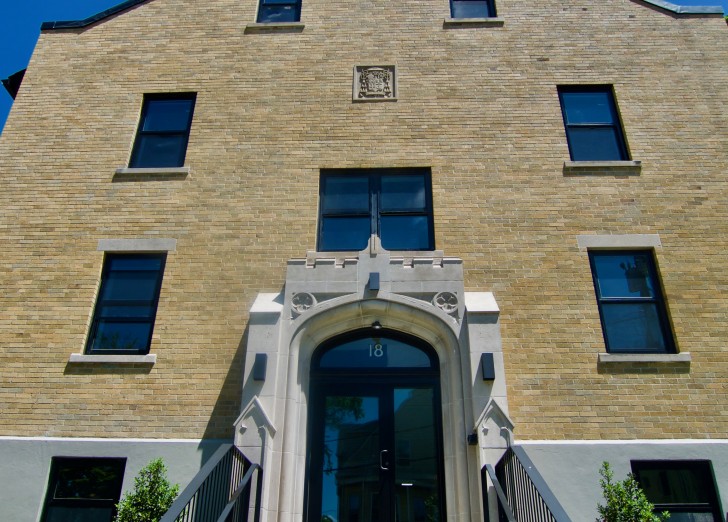 This conversion to apartments not only saves a piece of neighborhood history, but also provides a lesson in amenable gentrification. By offering rental apartments rather than condominiums, such a realistic development multiplied can offset anti-urban alienation such as the Fane Tower.

No. 18’s apartments are aimed at young professionals, rather than students. It is close to bus lines (some renters do not even have cars) and to Miriam Hospital. A few units may be rented furnished for short-term housing for visiting professors or medical residents.

This home, the convent next door, and the school up on Highland Avenue were associated with St. Raymond’s Church, which was built in 1911, just across North Main Street. As the Catalonian friar St. Raymond was the patron saint of expectant mothers, midwives, and children, it is appropriate that this building served as a home for troubled young people.

While much of the history about this Eisenhower-era four-story pile remains unrevealed, the current tale of the developer and an architect are worth noting.

Ghassan Daou, the force behind the conversion, is a Lebanese-Canadian businessman who came to Providence in 2008, wanting to do good things for the community. He is known to many on the East Side as the proprietor of the Wayland Square-anchoring Café l’Artisan, which he opened ten years ago.

Daou wisely knew he needed an architect, to both ensure quality and specify materials that would be cost-effective and attractive. He was thoroughly involved in the project even to the point of choosing hardware and wall finishes. 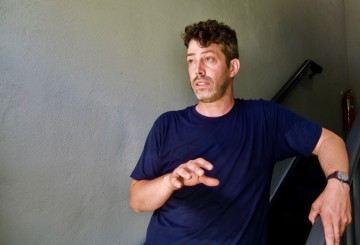 Jack Ryan was graduated from RISD twenty-five years ago and stayed in Providence. He worked for Friedrich St Florian on that architect’s World War II Memorial in Washington, and then for architects Kyna Leski and Chris Bardt at their firm, 3SixO, before going out on his own.

.Daou and Ryan also are restoring St. Raymond’s convent house next door, turning its nuns cells and small chapel into apartments. Also, they are already working on a design for a 20-unit apartment block on the open lot next door. 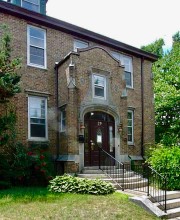 In addition to designing some strikingly modern houses around Rhode Island, Ryan has a number of successful restorations, including his own house in the West End, as well as the A.T. Cross factory on Warren Street for Transom custom woodworkers. 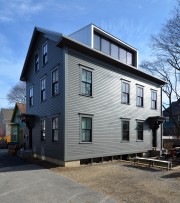 That combination of understanding how past buildings were put together, along with a modern sensibility, can be seen in the spaces at No. 18. Such modest quarters (the studios are 300 square feet) require the careful use of color to delineate kitchen and service areas; the apartments are attractively accommodating.

Cabinets are faced with a self-healing matte laminate. Countertops are composed of a synthetic stone and resin that reads as a more expensive material.

Jack Ryan describes 18 Eighth Street as “a great building, with great bones and a great history.” And now thanks to Daou and his architect, it also has a great future.

William Morgan has a degree in restoration and preservation of historic architecture from Columbia University, and like Jack Ryan, has taught architecture at Roger William University.